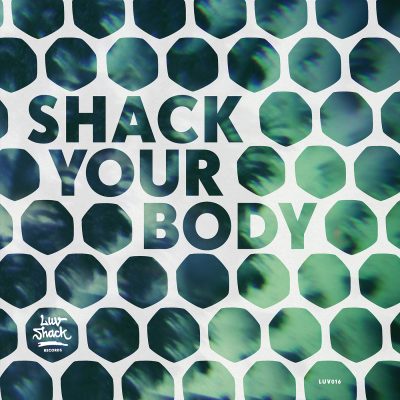 Complementing their eponymous party series, Luv Shack Records have brought together a group of new and regular artists for their first “SHACK YOUR BODY” compilation. With an array of nine choice cuts, this compilation offers just the right blend of laid back chuggers, disco stompers and more aggressive house tracks that have made their label nights so popular.

On “Got It”, Space Echo take us back to the halcyon days of disco, striking a similar note to their smash hit Soul Power, albeit this track being a bit more stripped down and synth infused.

“Another Bite (Dub Mix)” marks the first appearance of Redscape – a collaboration between Functionist and MOTSA. In an effort to channel the funkier side of house, the two producers combine classic rhodes, moog bass and an array of disco samples in a fashion that will inevitably tingle your toes.

Burnin’ Tears are bringing their sound to a new level with “Nights Of Horror”. The track builds on a solidly organic drum groove and a relentless electric bass to become a funky yet hypnotic piece of dub house, jamaican soundbits and church organs included!

LeSale takes an unusually sombre and hypnotic route with his contribution “Phantom Vibes”. This one is all about the swirling hihats carrying the groove, with wailing strings and a ballsy synth bass setting the tone afterwards.

ROTCIV continues to explore an acid tingled house style with “Dream In Silence”. Whilst building around the classic main acid ingredients, the track still obtains a great melodic quality and versatility that has become a characteristic of Brazilian producer ROTCIV.

The last new addition to the Luv Shack roster is the Berliner and Renate Schallplatten mastermind Sebastian Voigt. His “Smoke And Mirrors” intertwines industrial harshness with an 8bit synth theme and John Carpenter-esque pad and arpeggio themes.

The final track sees Jakobin & Domino return to their home stable with a moody stunner of a house track. “Retronome” is a laid back and dreamy ride packed with warm pads, silk y strings and an irresistible vocal theme.