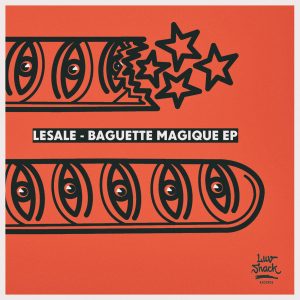 First off, there’s the original version of “Baguette Magique”, an uplifting dance opus carried by a tantalising disco sample, a plethora of bleeps and synthetic patterns, evolving into a cosmic, almost-techno piece in the second half.

Roman Rauch’s remix takes out the tempo and the quirkiness of “Baguette Magique”, instead opting for a laid back 80s tropical groove, turning the original theme into an insanely deep and obscure chord sequence.

On the flip, LeSale takes things to disco territory with percussive drums, a cheeky filtered sample and a hyperactive synth bass sequence on “House Rules”.