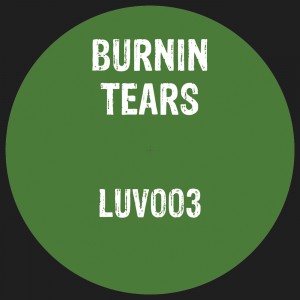 Two of the most played tracks from the previous Luv Shack samplers were from one of Vienna’s best kept secrets Burnin Tears. Both “Confessions” and “How I Feel” have hit the right notes with the right people over the last few months, and gathered glowing feedback while doing so. So yes, Luv Shack do absolutely the right thing and release a full on EP from the gang. With some choice adaptions and mixes from friends and label compatriots this four track vinyl and six track digital release again will be doing the business these coming months.

“Got a Reason” in original form once again comes with the trademark Vienna dub groove and reverberation. The pitched down gospel vocal that has done Burnin Tears so well the last two releases again makes a welcome return. Great claps and tambourines and sassy little uplifting and energetic tempo make this a great little proceeding.

Jakobin & Domino get to work nicely with their “Shed No Tears Remix” for “Got a Reason”. Some dirty knob twiddling like two naughty boys that can’t keep their fingers off the wet paint even though the sign says to do so. I can imagine their studio has a thousand “Post It” notes saying “Don’t Touch The Knobs”. Guess what? They touched the knobs!

B-Side starts with a pretty little midtempo joint in “Just the Same”. Booming bass and tasty percussion set it up nice and then a big yellow summery sound takes over with the warmest of sonica taking centre stage. A great Island track with flavour notes of Aperol, Moroder and my two year old Espadrilles.

LeSale takes “Just the Same” a step further with his “Balearic Pump” and beefs up the track with some freshly imported Ibiza air making the track less “Jack” and more “Jill”.

Bonus track comes via Hans Forward, a duo, consisting of se.vero and Rak3te, who are both part of the Viennese crew “Klub Sir3ne” and “RAW”. Their remix for “Got a Reason” just oozes a classy UK Bass and post dubstep sound. It is their first official release, but you can expect to hear lots more from Hans Forward in the very near future.

The hypo and manic Dub Agenda remix just plain tears up the rulebook and treads into the darkest of darks. Definitely not for the faint of heart.