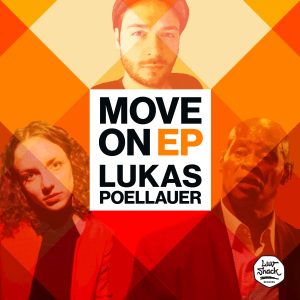 “I Don’t Care” is the name of his first single for an upcoming release on Luv Shack Records and features the austrian funk Band Mary Jane´s Soundgarden and the piano player Valentin Zopp. The vastly featured musical talent of the Band makes the track oscillate between tight, club ready production and earthy, live-jazz café vibes, with the hazy voice of singer Tanja Peinsipp at its core.

For his second track Lukas Poellauer teams up with legendary singer Hubert Tubbs of “Tower of Power” fame. Tubb´s remarkable vocal timbre perfectly contrasts the light footed instrumental, as he sings about “When A Groove Is In Control”. The actual groove itself is reduced and rather laid back, but Lukas Poellauer manages to bring in both dramatic and quirky overtones with a plethora of mallet, brass and string melodies.

Luv Shack´s very own Space Echo put their spin on “When A Groove Is In Control”, opting for a cold and eerie vibe with the help of digital bell pads and a tight, stripped down four to the floor groove.

Rounding off the package, we have the Pulsinger & Irl Dub Instrumental which really makes the fantastic arrangement and mix shine even more.

Luv Shack Records · Lukas Poellauer – Move On EP | LUV038
We use cookies on our website to give you the most relevant experience by remembering your preferences and repeat visits. By clicking “Accept”, you consent to the use of ALL the cookies.
.
Cookie SettingsAccept
Manage consent