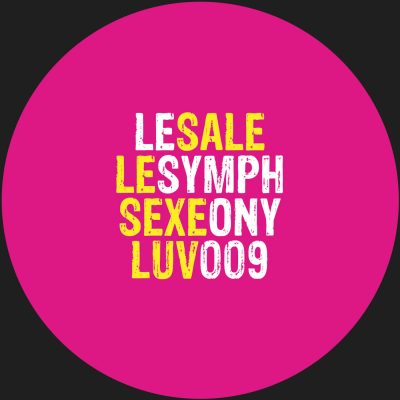 After the glorious debut “We Go Straight Ahead EP” for Luv Shack last summer, a welcome return for LeSale with his “LeSexe / Symphony” release.

Thumping drums and throbbing bass await prerequisite footwear in “LeSexe”. And you better have a pair of some serious leather that can withstand a night heavy shuffling as LeSale gets his Boogie Boots and swagger on. Original gets tight and mighty with a groove that just demand you stomp up a floor or two in search of the booty. Aroused and alluring vocals dampen all the right places and also set up for a long night of passion. The guy knows how to sex you up for sure!

Lee Stevens & Domino play round and go a little deeper into the night with their moodier reworking of “LeSexe”. A touch more sensual and amorous, proper House style, the guys also deliver some fine musical luv potion.

Flip side starts with original slice of “Symphony”, which is exactly what it says on the tin. Epic journey of classy production and arrangement, a symphony of emotion and feeling! Intellectual ear candy and elaborate with the elements, just one of those tracks you rather did not end. Again, LeSale has the heavy foot with the kick and demands you shift from the bar area promptly. It’s another get down track as LeSale smears his thick and funky fingers and thumbs all over the knobs in his quest to wear you out physically. You just have to dance!

As has been the case for the previous eight outings for Luv Shack, the guys bring something for everyone. The success of the label has been that too. Expanding a sound just a little bit further. It’s not just about making music, it’s about making music that people want to dance to, and then adding a few more people to that list with emotive mixes and some imagination. Can’t wait for LUV010 can you!?